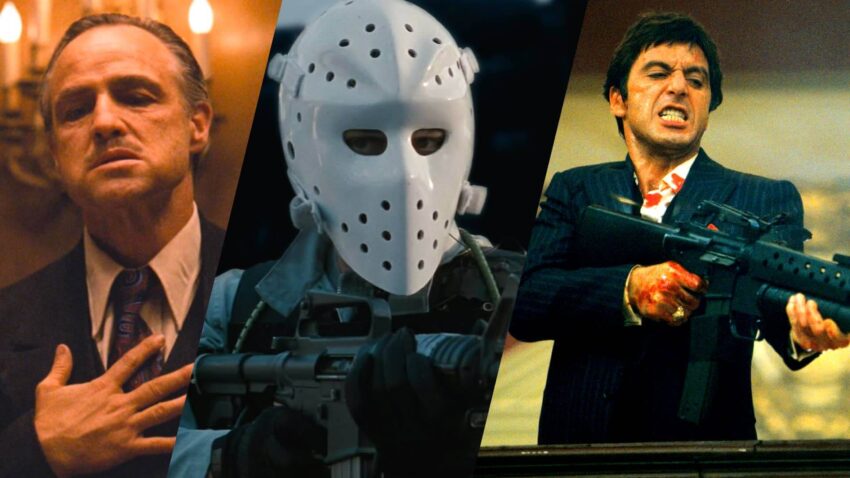 Crime/Noir is one of the most loved and viewed genre in World Cinema. Over decades, thousands of film industries around the world have delivered a wide variety of  crime movies. Today we are with a task to share, handpicked list of top 7 crime movies to watch before you die. Over years, the face of crime movies have changed a lot and it is now having different branches like Mystery crime, Gangster movies, movies on terrorism and much more. These movies are able to influence the lives of many. If you are thriller / Noir movie lover please don’t miss out these movies.

First on the list, IMDB’s most rated movies of all time. The plot of the movie revolves around a person who was jailed. 1994 released movie was directed and penned by Frank Drankbont. The movie has Tim Robbins and Morgan Freeman as protagonists. Shawshank Redemption tells the story of a banker named Andy Dufresne ( played by Tim Robbins ). Andy was sentenced to life in Shawshank state prison for the murder of his wife. It’s when Morgan Freeman playing the character of “Ellis Boyd Red” comes into Andy’s life. Andy’s life at prison changes after meeting Red. Surprise! Surprise !  Shawshank Redemption was a disaster at the box office, as it says time heals everything. It

was critically acclaimed later with 7 Oscar Nominations and is considered to be one of the best films of all time.

You may be wondering why Godfather series is in the second position, Well I don’t have an exact solution. I simply love Shawshank for its gripping plot. On the other hand, Godfather is a classy work which is quite lagging at some points of the story. 1972 crime thriller movie was directed by Francis Ford Coppola. The movie was inspired from Mario Puzo’s Godfather ( Novel ). The movie is considered to be one of the greatest and influential movies of all time. Unlike Shawshank, the movie was the biggest grosser in 1972 and was critically acclaimed well. The movie won 3 oscar awards best movie, Marlon Brando ( best actor ), best screenplay.

The  story revolves around the fights between 4 families which spans from 1945 to 1955. The first movie, The Godfather. begins with the wedding of Connie Corleone daughter of Vito Corleone. Things got changed when Johnny Fontane visits  Vito for a favor. The Godfather is succeded by The Godfather II and Godfather III.

One of the rarest occasion of world cinema, when a villain outperforms the hero. Dark Knight is the second movie of Christopher Nolan’s Batman series. The name rings the bell of marvel comics Batman, but this not that, the plot is entirely different. Dark Knight had Christian Bale as Batman and Heath Ledger as Joker. Heath Ledger was critically acclaimed for his performance in The dark knight. Internet movie database rated Dark Knight 9 out of 10. The movie was penned by Jonathan Nolan and Christopher Nolan himself. I believe, Movie won 2 oscars and 128 other awards which makes it as one of the best crime movies of all time. I think, I don’t have to explain much about Batman series.

Dog Day Afternoon is based on a true story, A man robs a bank to pay his debts and save his family which was going through hell. The movie is considered to be a masterpiece from Al Pacino.  The movie bagged 6 Oscar nominations and 1 award for best screenplay. The thing which amused me was, it was quite difficult to categorize Sonny as a villain / hero. Another important thing to be noted is, the movie was entirely shot in a limited area inside a bank which was quite an attempt in 1975.

Martin Scorsese an impeccable talent in the field of crime movies. His body of work addresses, Sicilian – American identity, guilt and redemption, modern crime and noir movies. 1990 released Goodfellas is one fine example of his works. The movie was inspired from a non-fiction book Wiseguy written by Nicholas Pileggi. Plot of Goodfellas was penned by Nicholas Pileggi and Scorsese himself. The movie has Robert Di Niro, Joe Pesci and Ray Liotta in the lead roles. Goodfellas revolves around the life of Henry Hill who desperately wanted to be the part of something significant. In order to attain his wish he quits his school and started working as a gangster. Henry Hill and his friends work their way to the top of the gang. During the process, they faced numerous challenges.

Goodfellas remains as one of the greatest films of all time under Crime genre and in general. In 2000, the film was deemed as culturally, aesthetically and historically significant.

If you don’t know Quentin Tarintino, you aren’t a big fan of crime movies. Or you may be quite ignorant about Hollywood movies. Pulp fiction is more or less a crime spoof movie, to be precise black comedy crime movie. The movie was widely accepted for its eclectic dialogues, awesome mix of humor and violence.  Pulp Fiction was directed and penned by Quentin Tarintino himself. It is considered to be the breakthrough for John Travolta. The film grabbed 7 Oscar nominations, out of which they have won one.

Pulp Fiction, the story revolves around two hit men, gangster’s wife, and a pair of diner bandits. If you like to know more about Pulp fiction plot please read: https://en.wikipedia.org/wiki/Pulp_Fiction

Se7en has got Morgan Freeman, Brad Pitt, Kevin Spacey and Lee Emery in the lead roles. The story spans over Detective William Sommerfield ( Morgan Freeman ), who is about to retire from the force, his assistant a short tempered but idealistic lad named David Mills ( Brad Pitt ). They were assigned to work on a murder case, their leads on the case made them believe they are after a serial killer whose killings reflects one of the seven sins. At first Se7en would be boring but as the time goes the movie grows on you and you won’t beleive how Se7en is going grown on you.

I believe you all loved reading my writings on best crime movies. I know, I have left out some big movies like Vertigo, 12 Monkeys, Django Unchained and many more. I deliberately did that, because this is going to be a unique list of best crime movies. Please leave your valuable suggestions under the comment section. Subscribe us and stay tuned for further updates.